YOUTH AT THE CORE OF AN INFRASTUCTURE REVOLUTION 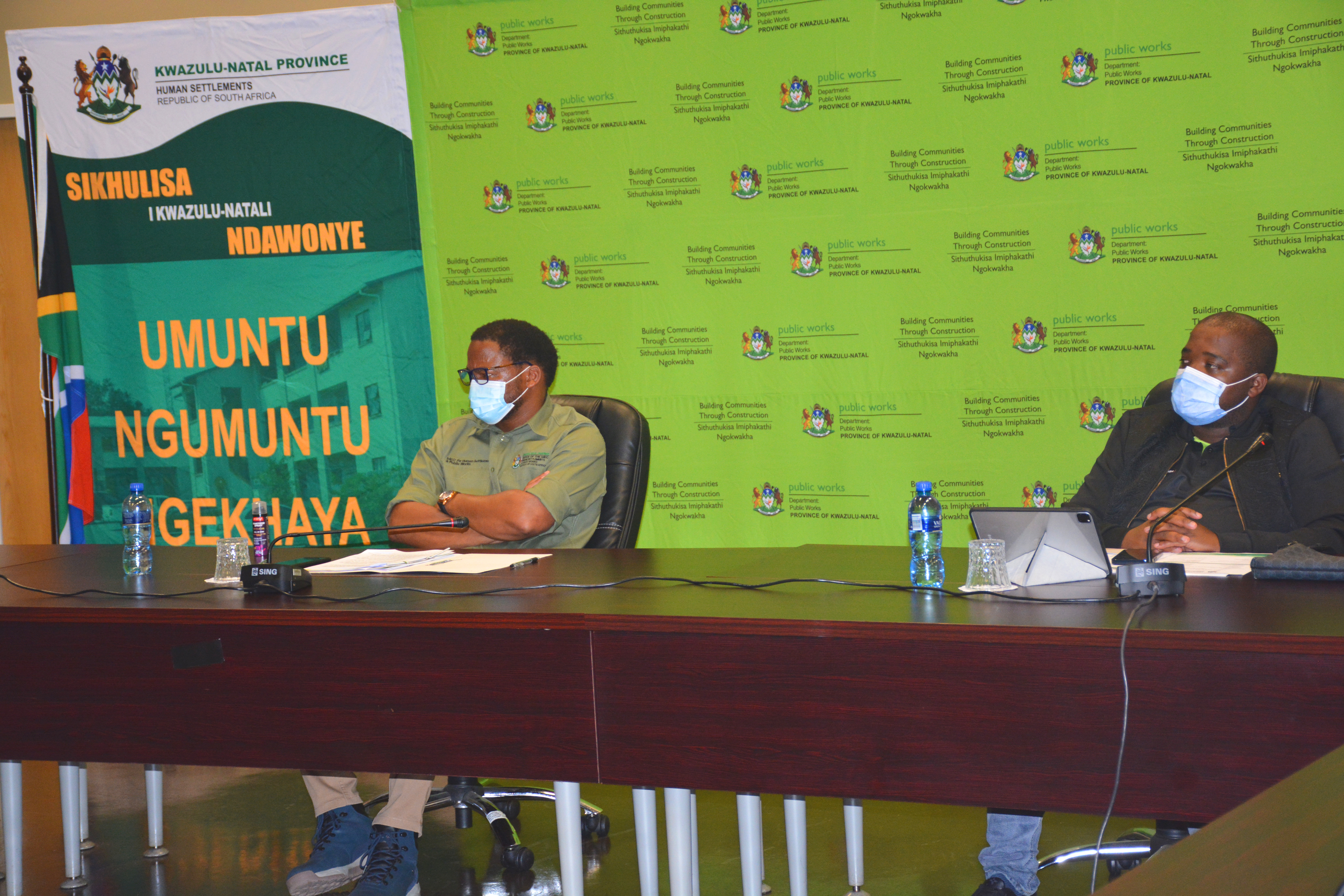 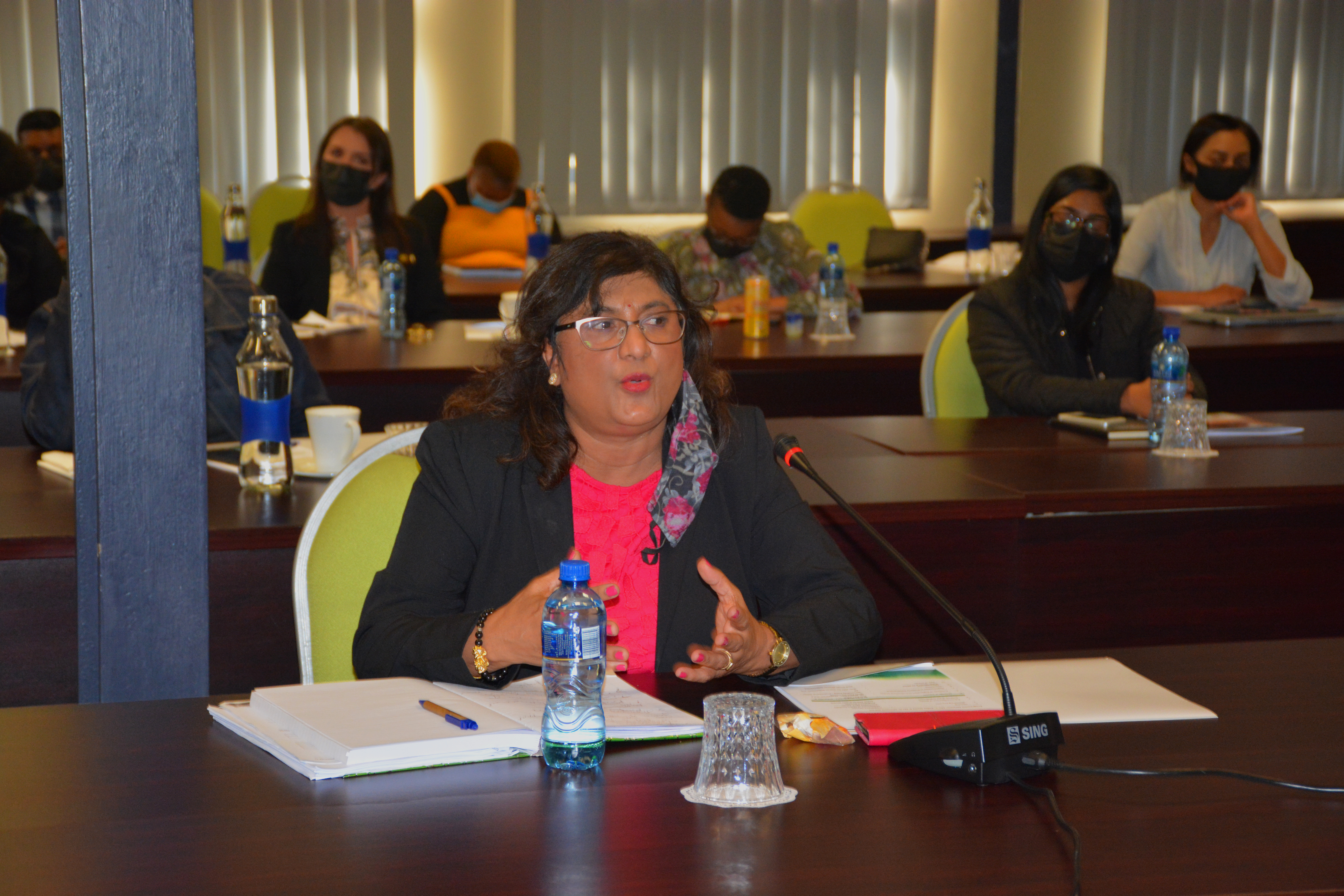 Guest speakers included Professor Hangwelani Magidimisha – Chipungu who is an academic in the Department of Town and Regional Planning, University of KZN. She is also the Chief Editor of her own journal, “Journal for inclusive Cities.” In providing the message of support, her focus was mainly on discipline, passion, consistency and focus. She reiterated her story in the field of Town Planning as follows; “In my field, innovation is often seen as the ability to create value for use by others, and this has been my strategy when reaching out to others. One of my innovative interventions focuses on ways to enable a greater number of students to complete their master’s degree programmes in a relative short period of time, while still in keeping with university regulations”. “The approach of group supervision removed the element of solitude among students, and helped to boost their morale.”

Mr. Khetha Zulu, Chairperson of S.A Town Planners Council advised planners that there was no one “size - fits all” method for starting out in the property industry. His advise to all graduates and professionals is to “get as broad an understanding of property as you can early on in your career, in order to develop your knowledge of property processes”. He also said that if people are interested in Planning he would advise them to learn more about residential developments, refurbishment or regeneration, retail planning and the environmental impact of developments.

MEC Jomo Sibiya, who marked his first 100 days in office last week, stressed the mantra of “speed, efficiency and service delivery”. In his remarks, he encouraged the youth to “have a permanent stake in digitally and physically shaping their future city and environment for the better”. He expressed the need for greater creativity from the youth and advised them to “be vocal in order to change the status quo”. 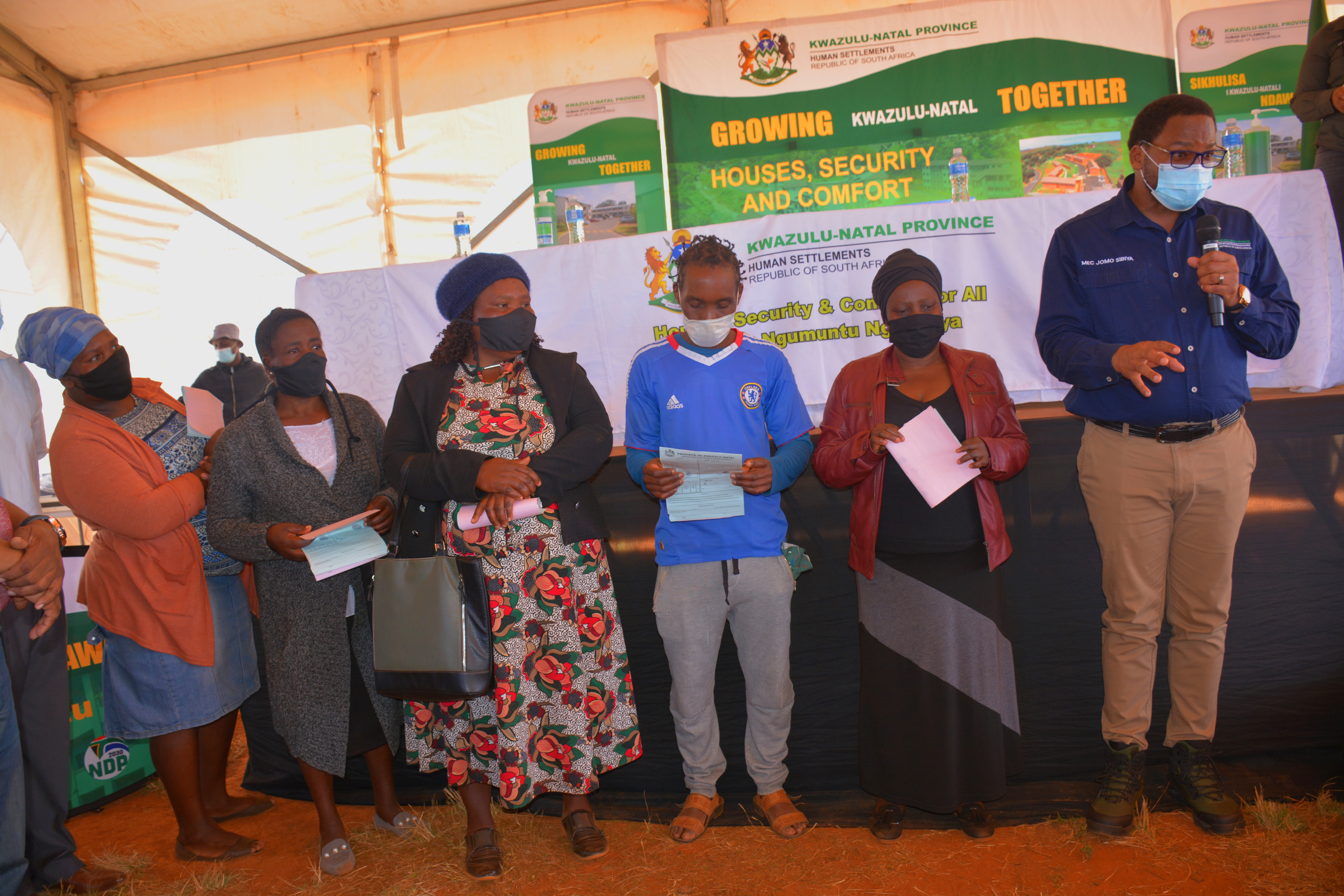 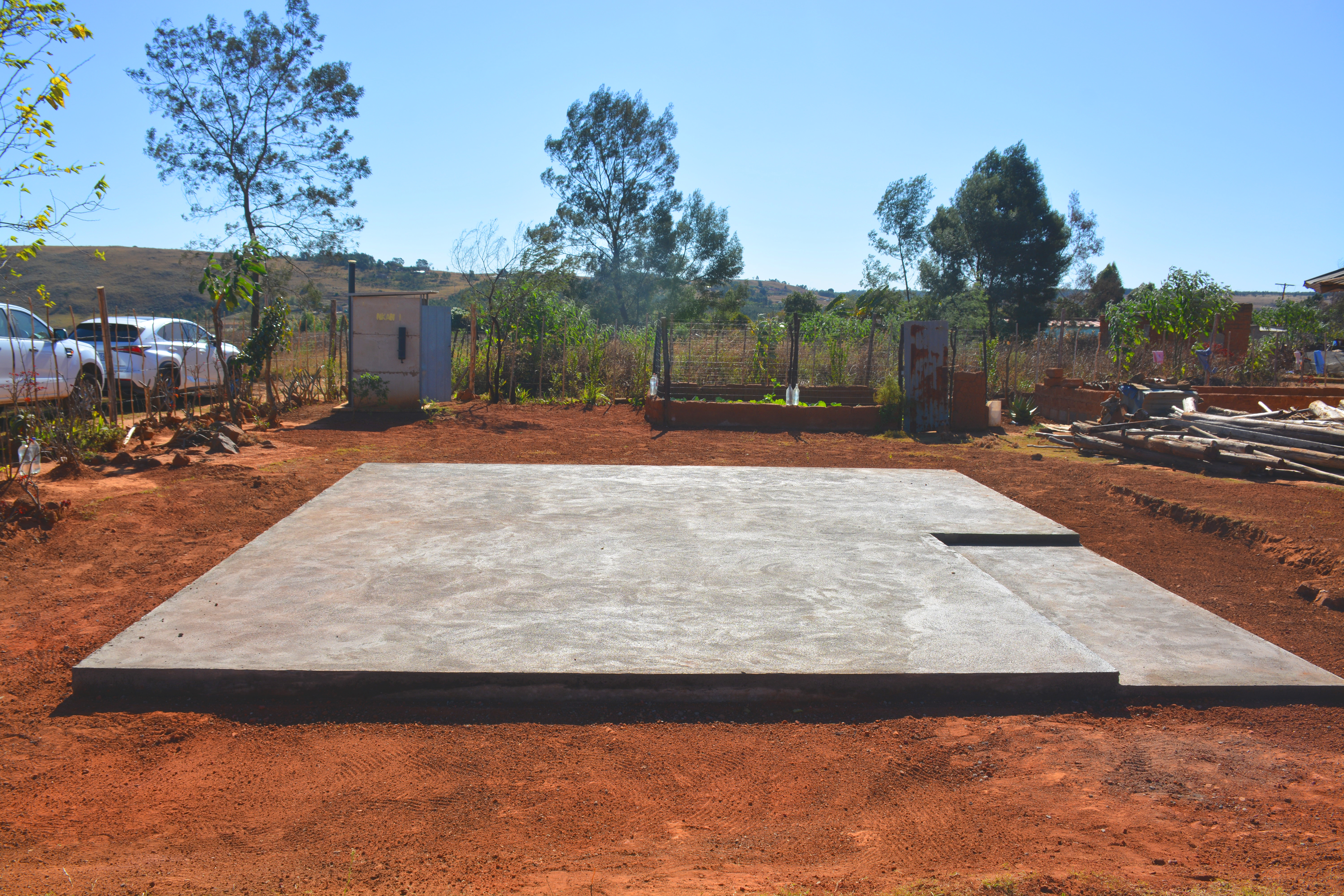 Operation Siyahlola seeks to assure that each act of government contributes to effective change in people's lives in the communities. It`s the Premier’s initiative aimed at delivering transparent and accountable services and redress in the KwaZulu – Natal. In his capacity as the Zululand District Champion, MEC Sibiya’s morning session began with an engagement with local leadership and the District Task Team to report on the functionality of the waroom, current and planned interventions on crime, COVID-19 and other pressing concerns in the District.

Responding to reports, the MEC highlighted that it is disturbing that contractors who are afforded the opportunity to participate of the construction sector are the ones hindering the progress to improve people’s lives. The visit to Edumbe Local Municipality, which falls within Zululand District Municipality, was to unravel issues linked to the Tholakele Rural Housing Project in Ward 05. In this project, the contractor failed to meet his contractual obligations in the delivery of the first phase of 300 out of 1000 units assigned to him from February 2019. Regrettably, up to this date, not a single completion has been achieved.

It was reported that even the milestones noted in the recovery plan submitted by the contractor was not met, resulting in a notice of breach of contract being served twice and finally termination was enforced after there was no improvement on site. Speaking at the community engagement in the Tholakele area, the MEC said: “as the Department, we are determined to bring a better life to the people and cannot promise that there will be no challenges towards this goal. I am here to tackle such, no matter how uncomfortable the circumstances are”.

“The aim is uncover unprofessional and poor workmanship, resolve conflicts at early stages in order to quicken the speed in service delivery,” added the MEC. In the Budget Presentation for the KZN Department of Human Settlements (Vote 8) on 21 May 2021, MEC Jomo Sibiya committed to doubling efforts to ensure the provision of sustainable human settlements to heal the wounds of the past. At the tempo with which the MEC moves to better the lives of people, one may be forgiven for not realising that he will be marking his first 100 days in office only this week.
Since being sworn in as the MEC for Human Settlements and Public Works on 9 March 2021, the hardworking “servant leader” has already actively engaged in development interventions in more than half of KwaZulu-Natal’s 44 local municipalities, with his hands-on and life-changing interventions today (13 June 2021) being in two local municipalities in uThukela District.
The visits to oKhahlamba Local Municipality and Alfred Duma Local Municipality marked the handover of a house to Gogo Mazibuko who is over 90 years old and living in abject poverty and title deeds to residents of St Chads, respectively.

News of Gogo Mazibuko’s plight reached MEC Sibiya through social media, with the MEC and his officials responding with haste to better her life. The MEC visited Gogo Mazibuko in Zwelisha in Ward 9 near Bergville on the morning after presenting his Budget Speech. He promised the Gogo that a house will be built for her in less than a month through the Operation Sukuma Sakhe (OSS) Programme. Just as he kept the promise to build a house within a month following an urgent intervention in Msinga in April 2021, the MEC once again proved that he makes no empty promises. Gogo Mazibuko’s house was handed over to her within three weeks after the MEC’s promise!
This handover comes just five days after MEC Sibiya was in uMtubatuba Local Municipality to introduce a woman emerging contractor who will construct houses as part of OSS. The MEC insisted that it will not take longer than 21 months to construct these 100 houses.

SPEED, EFFICIENCY AND SERVICE DELIVERY FROM ALL CATEGORIES OF STAFF 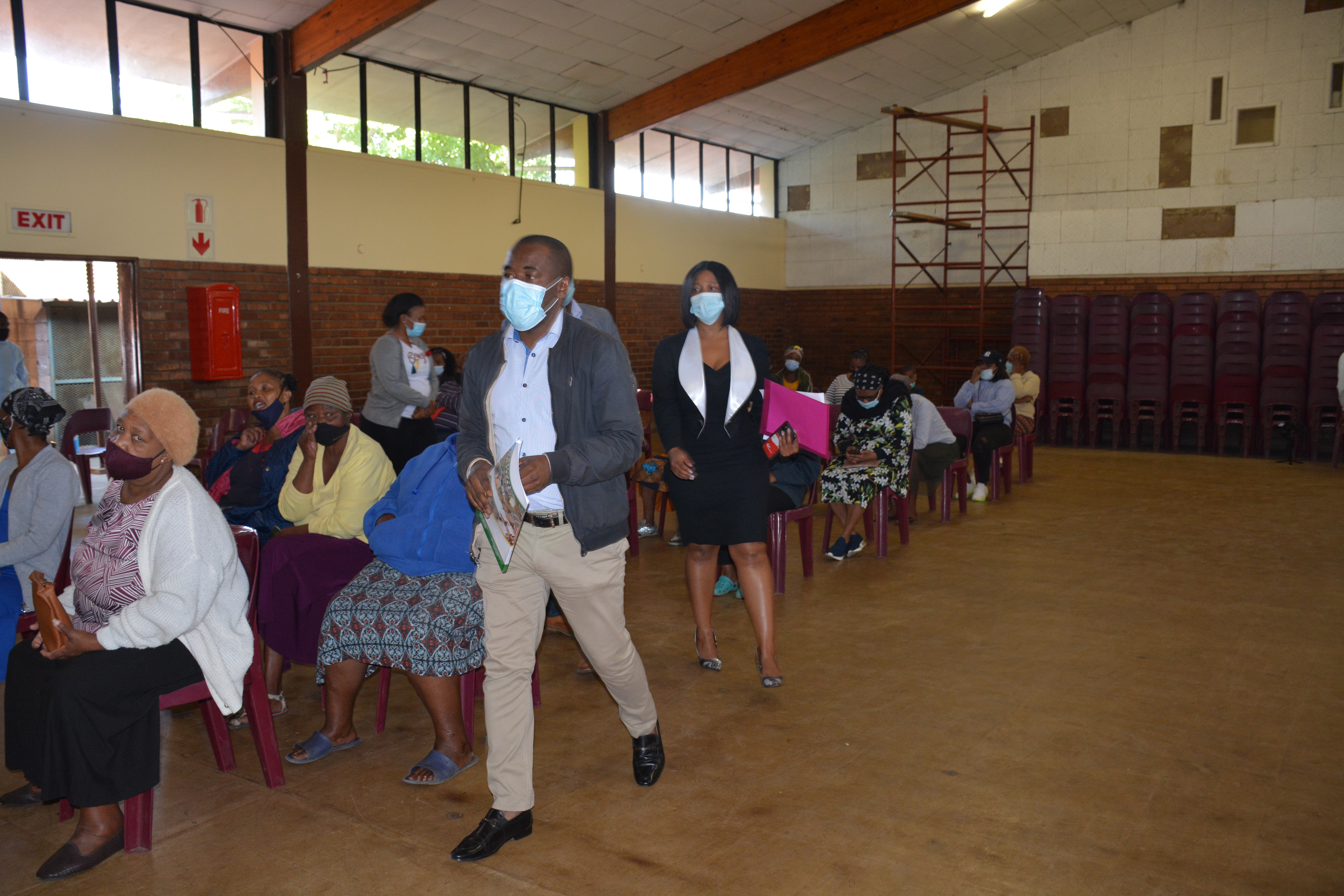 The Head of Department, Mr Mdu Zungu, and his Management and staff work at an unwavering pace to restore dignity and pride to the citizens of KwaZulu-Natal. Mr Zungu and officials from the Department were in Msunduzi Local Municipality today (14 June 2021) to accompany the Mayor, Cllr. M. Thebolla, in the handing over of 122 title deeds to Edendale DD (Imbali 1 and 2) residents. Working together with the National Department of Human Settlements and Msunduzi Local Municipality, a total of 184 properties will be transferred to residents in Imbali. The balance of 62 properties are in the transfer process.
The KZN Department of Human Settlements has, during MEC Sibiya's 100 days in office, already delivered 4 807 title deeds. The target for this financial year is 10 949 title deeds.

This initiative to ensure home ownership by the rightful beneficiaries in Imbali follows a weekend where the Head of Department and officials gave valid inputs towards a programme to mark MEC for Human Settlements & Public Works, Jomo Sibiya's first 100 days in office; accompanied the MEC to Alfred Duma Local Municipality to hand over title deeds to St Chads residents and to oKhahlamba Local Municipality to hand over a recently built house to 91- year old Gogo Mazibuko.

The high standard of delivery set by the Department’s Management, led by the hands-on Head of Department, is in keeping with MEC Sibiya's reflection that "all categories of staff understand their roles and fully commit to speed, efficiency and service delivery". Today Tuesday 8th June saw a plethora of service delivery initiatives in Mtubatuba Municipality in uMkhanyakude District being unveiled including a Tourism Centre and SMME Facilty, launch of a Community Access Road, introduction of a contractor Ms Mtshali from Uphenyo Trading who will build 100 Operation Sukuma Sakhe houses in Ward 9, assistance with agricultural implements and inputs to 10 local cooperatives. In attendance and officiating at the unveiling of these service delivery initiatives were KwaZulu-Natal MEC for Human Settlements and Public Works Jomo Sibiya, MEC for Cooperàtive Governance and Traditional Affairs Sipho Hlomuka and Mtubatuba Municipality Mayor Cllr Verus Thobelani Ncamphalala and local iNkosi LS Mkhwanazi. 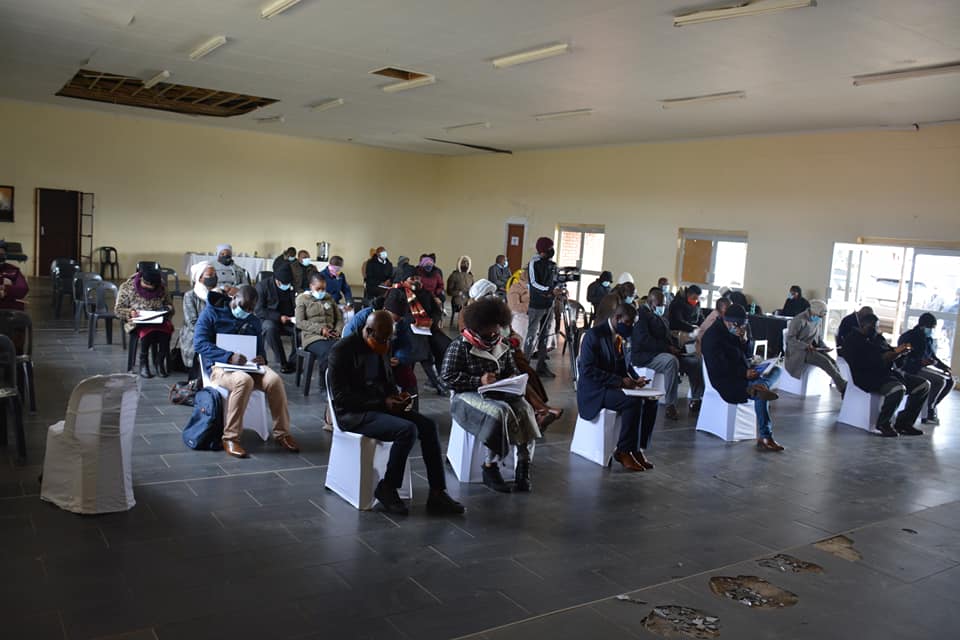 The lives of three people from uMsinga Municipality's Wards 3, 6 and 15 took a turn for the better